Helium leak detection was used to find a large water leak at a large office complex in Dayton, Ohio, in a 400 ft long, 6″ schedule 40 steel, insulated hot water line, buried between 5-10 feet. The pipe water leak was rated at 2 gpm and the pipe pressure was normally at 50psi. If the pipe wasn’t insulated with a plastic cover, we could have pressurized the line and listened to the leak. Due to the heavy insulation and jacketing, and the depths that the pipe was run, neither sound or heat were able to be tracked. The only possible method was to pressurize the system with helium and trace the line with electronic helium detectors.

This type of job requires careful planning to ensure you’ve got enough helium on hand and to make sure that the leak detection can be performed. When I arrived,  the mechanical contractor on the job had everything set up for filling the system with the helium tracer gas. It took almost two large tanks of helium to fill the 400 ft of 6″pipe. I “deputized” one of the contractors and he helped me search over the pipe run with my spare electronic helium detector, for helium rising. The biggest challenge with a helium leak detection project where the pipe is insulated and jacketed, is the possibility of the helium traveling a distance under the insulation before rising.  After 15 minutes, we did find an area where we were getting whiffs of helium, and then after another 10 minutes, the electronic helium detectors were “pegging”. With a little help from sound ground probing, the leak was properly located.

A couple of days later I received the following Email from the engineer:

You were right on with the helium test! The leak was at the bottom joint which is within a few feet at most to the center of our dig point. Thanks for your expertise. I thought you’d like these photos. The pipe was 7 ft. deep to the top of the lower 45 degree fitting.  Nice work!  -John” 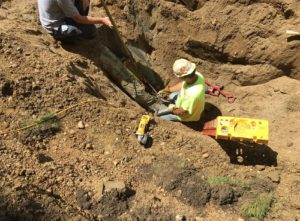 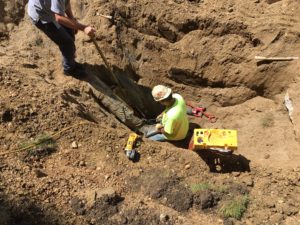 I received a call for a Middletown Water Leak Detection at a high school stadium where their water leak was losing roughly 1 gallon/minute with no...

November 19th is World Toilet Day. I remember asking my Grandpa what the most important invention was during his lifetime. He sat back, took a...

Three leak detection services, each over 400 ft long in one day

The average length for leak detection services is 50 to 100 ft long. Occasionally I get repeat work, which is becoming more common the longer...

Every now and then, God sends you someone to brighten your day. Yesterday I had several! The first was William from Northside calling in the...