Most of the leak detection I perform involves finding sources of water leaks or slab leaks underground. Occasionally I perform a house water leak service for piping that’s above ground. These involve water leaks occurring from a drain or  domestic water line, with water appearing as far away as 20-30 feet away from the actual pipe leak. At this home, there was a stream of water flowing down from a header at the basement stairs. The actual water leak was above a first floor door frame leading to the kitchen, almost 20 feet away. The leak was from a pin hole that had developed in the pipe over time. You can see the verdigris, or green deposits on the pipe, in the photo below. This is formed from the water leaking, and the electro-chemical reaction from the copper and H20 combining with the air.

I began the leak detection by observing the entire affected area with a highly sensitive infrared camera. The device I use shows areas where water is soaking the drywall on the inside as dark and other areas lighter. The camera actually reads the coolness of the water evaporating, which allows for tracking down the leak. In this case, as well as many, the image produced helps find the house leak, but isn’t definitive enough to provide a final answer. There was water showing at the basement ceiling as well as a wood flooring area outside the kitchen, (as well as the water mentioned above flowing from the header at the basement stairs) which corresponded with the wood flooring leak.

The owner was very happy that the leak detection was accurate and efficient. Without professional leak detection, the plumber would have had to open up a lot of additional drywall, causing much more expense and mess in the end! 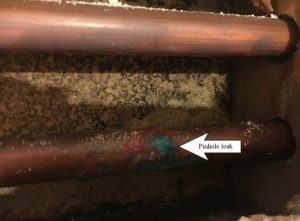 I received a call from a maintenance supervisor looking for a leak detector who could find a slab leak at an assisted living facility in Florence...