Jim Eckhoff of Eckhoff Plumbing called needing the service of a leak detector for a water leak in a fire main at Colerain Fire Department’s tower training facility. This was a 4″ galvanized water service running from a fire department connection into the fire tower. The leaking water service was also connected to a 3″ standpipe riser for fire departments to attach hoses at each floor, simulating a multi-floor office or apartment or other occupancy. One of the challenges with this leak detection was that Colerain Fire Department also had a crew performing some very sophisticated training exercises at the same time. A ladder truck was being utilized for a 4th story stretcher/cradle rescue exercise with an attached fireman, while I was detecting the leak. The diesel engine in the ladder truck was revving every time they raised or lowered the ladder, which made hearing the water leak almost impossible.

As with any leak detection, it is important to have the water pipe be full of water, so that nitrogen, added to the pipe system, will mix with the water, making better sound at the leak. This allows for the leak to be detected with a highly amplified listening device. The fire department had a pumper truck on hand pulling water from the adjacent fire hydrant, then, through a hose, pumping up the fire department connection leading to the building. They set the pumper truck at 60 psi, which I was told was the lowest pressure they could set the pumper truck to provide a consistent pressure. I connected my nitrogen tank to the bottom of the standpipe riser and ran it at 65 psi, just enough to allow the nitrogen to overpower the water. I detected the sound, located the leak and now the plumber will be able to repair the leak this week. Locating the water leak helped Colerain save a small fortune as the 4″ line was run under a huge 6″ concrete slab. Pinpointing the leak allowed the plumber to dig in a 4ft x 4ft excavation rather than digging the entire line. 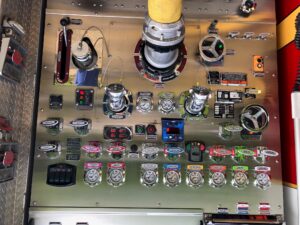 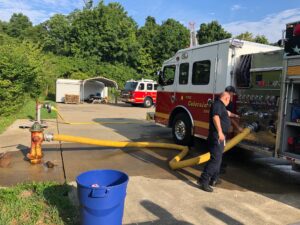 Need the help of a leak detector? Find out why Reliable Leak Detection is considered the trusted local source of leak detection, working as the exclusive leak detector for over 50 plumbing companies from Northern Kentucky, Cincinnati, Dayton and SE Indiana. Call Brandt at 513-488-6234.

Found underground leak location on hill in Erlanger, Kentucky. The home was on a hill roughly 50ft higher than the meter, which made evacuating...

Middletown, Ohio water leak location service was for a home that had a large barn with a water leak between in the water line running from the...