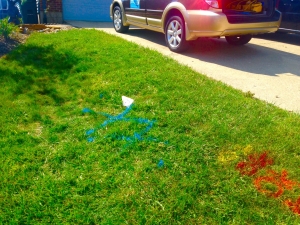 I was called out to a leak location job in Alexandria, KY. The home owner had a leak previously a few years earlier and thought it might be a repair that had gone bad. While this does happen, for this specific job, it was a case of a new leak a few feet away from the original.

The water service was 3/4″pvc plastic and the water pressure was roughly 70 psi, which produced reasonably good sound. Unfortunately, there was a constant breeze the entire time which created such a distraction that I set up wind shields to block the wind. After reviewing several locations with our amplified listening devices I found that an area adjacent to the original leak that provided the best results. The listening work was followed and double checked by running compressed air to evacuate the system and then using helium which was found using a helium detection device. By finding the leak the homeowner was able to have her plumber excavate at the exact location, minimizing her costs and the damage to her yard. 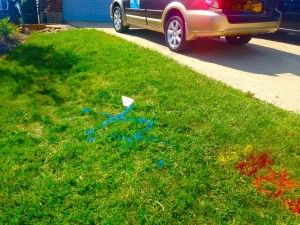 I received a call for a Middletown Water Leak Detection at a high school stadium where their water leak was losing roughly 1 gallon/minute with no...

Jim Eckhoff of Eckhoff Plumbing called needing the service of a leak detector for a water leak in a fire main at Colerain Fire Department’s...

Underground water leak location service at a little hotel in Florence, Kentucky. The 4″ductile iron water main ran from the meter pit across...