Reliable Leak Detection received a call from a landscape contractor, Greenrise Technologies, looking for a leak detection company based in Cincinnati to help them find significant water leaks in a roof garden installation at Christ Hospital. I accepted the project, with the understanding that they knew roughly where the water lines ran and that we could do whatever was necessary to find the leaks. It turned out that the roof garden system was installed out of sequence and the irrigation water mains, which are usually run 6″ below the surface in the dirt were actually run beneath 9″of dirt, 2″ of styrafoam insulation and two layers of heavy duty drainage system, the combination of which pretty much killed any sound that was being produced by the leak! We had to dig down to the pipes to get sound and were finally able to get close to the leak by penetrating the roof drainage membrane, then finally pinpointing the leak by digging through the entire 18″system to expose the pipes!

After we were finished with the main leak, we found that the meter was still spinning. We had a suspicion that there might be leaks at some of the planters (see photo) and so we listened at each of them and found that there were five planters with water leaks. After all of the water leak repairs, Greenrise was pleased to find that the system was no longer losing water. Mission accomplished, with a successful leak detection! 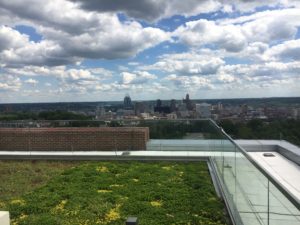 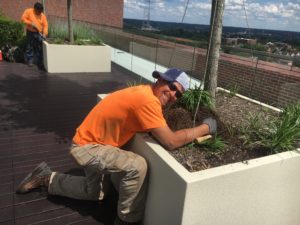 I received a desperate call from the manager of a large apartment community with a huge #pipeleak. She had almost 400 apartments without water due...

Found underground leak location on hill in Erlanger, Kentucky. The home was on a hill roughly 50ft higher than the meter, which made evacuating...