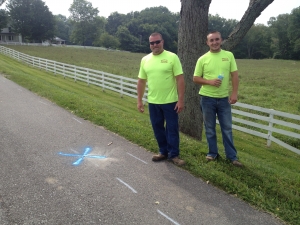 Water main leak detection in North Vernon, Indiana involved a 1/2 mile long, 8″water service running from the main line at Route 50 down a winding country rode to a chicken production farm which uses over 3 million gallons/month! The water main, which was C-900, which is a thick wall PVC, was only 2 -3 years old with pressure at roughly 60-70 psi and leaking at a rate of 10 gallons/minute. Most of that water was leaking at the bottom of the 1/2 mile run but the contractor involved, Brooks and Earl of North Vernon, wanted to survey the entire line to make sure there was only one leak. Starting up at Route 50, sound was checked every 2 ft for the entire distance. There was no sound level above 5 decibels the entire distance with the leak detection sound equipment at full amplification, until we reached the bottom 20 ft. With a dozen small interferences, the job was finished within a little over 90 minutes. The sound produced at the actual leak was substantial, at over 100 decibels with the amplification dropped to about a third of capacity , allowing for a very tight and precise leak detection in less than a 2 ft x 2ft area. The plumber didn’t want to run compressed air or helium as there was no way to fully shut down the system and keep the compressed air and helium from entering the large water main at Route 50. Reliable Leak Detection does try to run compressed air and helium tracer gas (in conjunction with helium sniffing equipment) on every project as double checking ensures a better, more accurate leak detection. Looking forward to feedback from Terry, Glen and Colton of Brooks and Earl. The repair should be complete by the end of the week.

For Fix a leak week, try performing a dye test with each of your toilets to ensure that they’re not leaking. If you find a leak, then you...