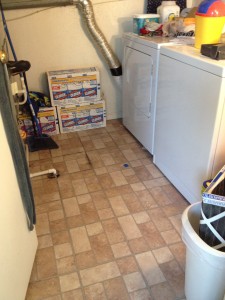 Location where harmonic peaked under slab shown by blue tape in front of dryer. 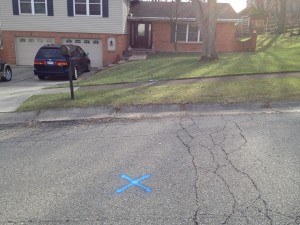 Location of actual leak, which was out in street and Cincinnati Water Work’s responsibility!

This was a project in Delhi where the plumber and the homeowner heard a very distinct water leak sound in the Laundry Room/Mechanical Room. The home was a slab type with partial basement. The water line came up through the slab adjacent to the water heater and furnace, where the water meter was located. The plumber assumed that the water leak was between the meter and the valve out in the yard, probably in the Laundry Room, which made sense as the water sound there was very loud. I listened, using my highly amplified listening equipment, with the water valve in the yard open and then closed the valve and noticed the water leak sound didn’t diminish! I began running tests using compressed air and found that there was actually no leak inside the home, or for that matter, anywhere in the homeowner’s system. This was a bizarre case of a very strong sound leak harmonic traveling from a leak that was found to be in the middle of the street, which I located to assist the water works in quickly resolving the sound issue for the client. The homeowner was ecstatic to find that they weren’t going to need an excavation! NOTE: This sound harmonic occurred due to several items: 1. The water service was copper throughout. Had the line been plastic, which doesn’t transfer sound nearly as far, the harmonic would probably not have happened. 2. The water service coming up through the slab was not insulated, which created a direct connection to the concrete slab, thus adding to the intensity of the harmonic. 3. The water line ran through the meter, then directly up to the ceiling (all copper pipe) in the Laundry/Mechanical Room and was run tight against the ductwork, which also added to the noise level. The added sound was from the sheet metal in the duct acting as an amplifier.

If you have a water leak sound in your home, call Reliable Leak Detection at 513-488-6234 or any phone numbers on our Contact page. We can discuss the issue with you to find what steps should be followed to determine if you have a leak, and whether or not you need our services.

Middletown, Ohio water leak location service was for a home that had a large barn with a water leak between in the water line running from the...

Reliable Leak Detection was called to perform at leak detection service at a major office supply company in Cold Springs, Kentucky. The...

This water pipe leak is the most challenging,  due to the lack of ability to isolate the system. Most jobs have a water meter or shutoff valve...