I remember asking my Grandpa what the most important invention was during his lifetime. He sat back, took a puff on his pipe and said “It sure wasn’t sliced bread!” Then he said “The most important invention that has occurred during my lifetime was the toilet! If you have ever had to walk outside to a privy and have your behind stick to an ice-cold seat in the middle of winter or a spider bite you in the middle of summer, then you’d understand!” What we take for granted in the USA and in most of the developed world, still doesn’t exist in many places.

Today is World Toilet Day at the World Health Organization (WHO) “Sanitation prevents disease and promotes human dignity and well-being, making it the perfect expression of WHO’s definition of health, as expressed in its constitution, as “A state of complete physical, mental, and social well-being, and not merely the absence of disease or infirmity. . . The guidelines recognize that safe sanitation systems underpin the mission of WHO, its strategic priorities and the core mission of ministries of health globally.”
World Health Organization (WHO) Director-General, Dr Tedros Adhanom Ghebreyesus, 1 October 2018

The flushing toilet was invented by John Harington in 1596. Joseph Bramah of Yorkshire patented the first practical water closet in England in 1778. George Jennings in 1852 also took out a patent for the flush-out toilet. In a time when bathroom fixtures were barely spoken of, Thomas Crapper, (who is frequently mentioned as the first inventor of the toilet) heavily promoted sanitary plumbing and pioneered the concept of the bathroom fittings showroom. His fame occurred due to his strong drive to promote the toilet and in-house plumbing fixtures, making him in some ways the father of plumbing. -Note, the above info is from Wikipedia with a little tweak from my plumbing design days. The toilet shown below is an American Standard Cadet.

As a leak detector I occasionally get called out to homes or buildings that have leaking toilets. You can easily check to see if your toilet is leaking by putting some food coloring dye into the toilet tank and watching the tank over a 5- 10 minute period to see if the dye migrates to the bowl below. If you see the dye in the bowl, you know that your flapper is allowing water to leak and causing unnecessary water usage.

In conclusion, next time you’re sitting on the toilet, remember how lucky we are to have such an awesome device! 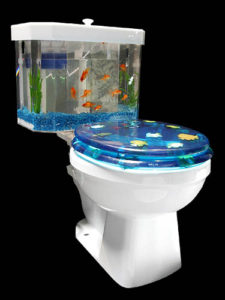 Leak location service at a residence in Monfort Hts, Ohio involved a 1/2″ water line running to an outside hose bibb. The water line was run...

I was called out to perform a pipe leak detection at a home in Union, Kentucky to find a water leak that had started the prior week. The owner...

Reliable Leak Detection received a call from a landscape contractor, Greenrise Technologies, looking for a leak detection company based in...

Water line leak in Florence, Kentucky involved a water meter in the middle of the front yard with the water service entering the home in the...