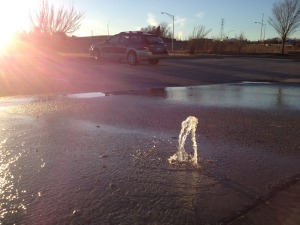 Reliable Leak Detection was called to perform at leak detection service at a major office supply company in Cold Springs, Kentucky. The combination fire/ domestic water main ran from the front of the building to the rear and into the dock area. It appeared the pipe broke at an elbow or tee as it transitioned from the water main in the shopping center loop drive to the water service at the dock driveway. The store water pressure was down to 20 psi (from the normal 75psi,) which wasn’t enough to flush toilets. Unfortunately, on jobs such as this, there is no way to double check the leak detection service work with compressed air and helium, due to the fact that the line was feeding the sprinkler and domestic water systems, then splitting in the building. The temperature when the leak was looked at in the morning at 7:30am was close to 0F and the leak had frozen to the point where there was enough of an Ice Barrier that no sound could be detected. The temperature rose significantly that day and upon arriving at 4:00pm, the temperature was closer to 30F and the sound of the leak had returned in a big way. The water plume in the photo, which was 10″ high, was caused from my drilling into the asphalt to ensure that the leak location was accurate. From the appearance of the water plume, it looks like the leak detection was really close!!

The client was thrilled to have an accurate leak detection so that their plumber could quickly excavate and repair the water service. The water pressure was then back to it’s normal 75 psi and the store was able to resume normal operation.

NOTE: When drilling to determine accuracy with leaks, usually there is no plume, just water dripping off the bottom of the drill bit. That’s because the water lines are typically run 3-4 feet deep and bedded with gravel and the water spreads out into the gravel bed, rather than up. 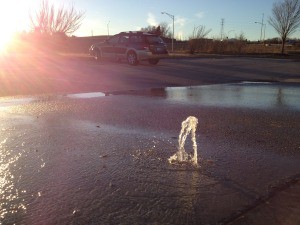 This water pipe leak is the most challenging,  due to the lack of ability to isolate the system. Most jobs have a water meter or shutoff valve...

Water leak location in Boone County, Kentucky: I received a call from Boone County with similar circumstances to the Hebron call, except they had...

I’ve been performing leak detection on a job in Martin, Kentucky where there was a 10,000 gallon/day water leak on a 6″ PVC combined...

I received a desperate call from the manager of a large apartment community with a huge #pipeleak. She had almost 400 apartments without water due...